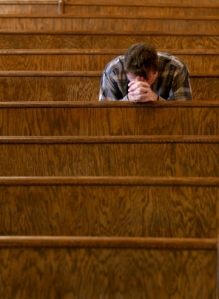 For unto us a Child is born, unto us a Son is given; and the government will be upon His shoulder. And His name will be called Wonderful, Counselor, Mighty God, Everlasting Father, Prince of Peace. Of the increase of His government and peace there will be no end, upon the throne of David and over His kingdom, to order it and establish it with judgment and justice from that time forward, even forever. The zeal of the LORD of hosts will perform this. – Isaiah 9:6-7

Christmas is not always a happy time.

Isaiah was a sensitive man who was weary of living in such a world of hurt and loss.

Isaiah lost king Uzziah after a prosperous 58-year reign. Admired for his efforts at religious reform and his personal devotion, Uzziah had impacted a nation—and a young man named Isaiah. Uzziah’s passing cast a long shadow over the future of the nation. Isaiah’s hero and spiritual leader was dead.

Isaiah began to seek God more than ever during dark and disturbing times. The world seemed as if it was reeling out of control. Then God gave Isaiah a powerful vision of His glory and power (Isaiah 6). Later, in Isaiah 9, God revealed details concerning a future Messiah who would restore order to a chaotic and corrupt world. Convinced of the rule of God in his life and in the world around him, Isaiah was transformed by the Christmas Revolution!

Let me say it again: Isaiah was gripped by a vision of the kingdom of God ushered in by the birth of a child – it would color the rest of his life and work.

You may feel life is reeling out of control and the world is a dark and painful place. And it is. You are not wrong about that. Isaiah saw it too and longed for change… real hope that Someone was going to come and reshape, reform, renew, and recreate all of life! Peering through time to observe what God was doing behind the scenes in human history, Isaiah saw the child… and he penned a poetic song describing the Son of God upon whose shoulders all authority will rest: Wonderful, Counselor, Mighty God, Everlasting Father, Prince of Peace!

That child was born in Bethlehem 2,000 years ago, but He is near you at this moment. He lives and He is not hiding in some far away corner of the universe. He is no Santa Claus, but He does see you always. He knows you.

The world you are living in can be filled with hope and light by opening the door to your heart. What do I mean by that? “Opening the door” includes…

The King is here. He patiently waits for you to get that. It’s the bottom line of the Christmas Revolution.

Editor’s Note: If you would like to obtain a single PDF file containing all 25 blogs in the “Counting Down to the Christmas Revolution” series, click here to download. May God richly bless your efforts to explore the revolutionary truth underlying the Christmas celebrations around the world.

One thought on “Day 25: Counting Down to the Christmas Revolution”