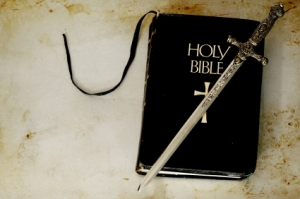 Yesterday, while paying for gas I saw a donation bin on the counter for a Christian ministry to outdoorsmen. Printed on the side was a Bible verse: “He was a mighty hunter before the Lord” (Genesis 10:9). Of course, this suggested that hunters might find some level of affirmation for their sport from that verse.

However, there is strong reason to believe that Nimrod, the subject of the verse and the founder of the first world empire that included the construction of the Tower of Babel, was probably not a good guy, but a bad guy. “Before the Lord” can simply mean that God was aware of his activities… but “awareness” falls short of “approval.”

Do you want to use a verse describing a man who was offensive to God and apply it to your hunting ministry?

If you really want to understand a Bible verse, it’s always important to understand the “context” of the verse… you need to ask: what is the overall message and background of the passage and book that it comes from? Otherwise, you may reach a misleading conclusion regarding the verse’s meaning. A scholar explains why…

“A text without a context is just a pretext for whatever you want it to mean.” – Ben Witherington, during New Orleans Baptist Theological Seminary’s Feb. 15, 2013 Greer-Heard Forum

Do you want to know God? He has revealed everything you need to know about Him on this side of heaven through the Bible, not in the form of systematic lists of dogma, but as truth-filled encounters between God and ordinary individuals just like you. Much of the Bible contains stories of God revealing Himself and His activity in the world… and He has not changed… but be sure to read more than a sentence or two!

The earliest reference to the Christmas Revolution is found… in Genesis?

Created in the image of God, Adam and Eve were given an entire world to rule, shape, and nurture (Genesis 1:26). Later identified as Satan (Revelation 20:2), the serpent deceived the couple into abandoning God’s rule in their lives, embracing self-rule as a superior lifestyle (Genesis 3:1-6). The consequences were awful and immediate for our first parents–and for you and me.

God cursed the serpent and the earth, withdrawing His presence (Genesis 3:14, 17; Romans 8:20-21). The creation that was ours to rule became the legal property of Satan. That’s why we have to contend with disease, disasters, despots, and death: we are living in a kingdom of darkness at this very moment (Colossians 1:13), corrupted by our sin and Satan’s rule (Luke 4:6; 1 John 5:19). The devolution of nature is mirrored in every human soul. “Free” from God’s Presence and Life, the human soul stumbles around in a moral twilight, gasping for a few breaths of happiness, and reducing deity to the miniature confines of the human imagination.

In Genesis 3:15, we find the first word of hope to the hopeless, the earliest expression of the good news, and a stunning prophecy of Satan’s final defeat delivered by a human descendant of Adam and Eve. The ancient serpent will strike this Man, but the Man will fatally crush the great Deceiver (1 John 3:8). Adam couldn’t do this, but Jesus did (1 Corinthians 15:22). He was no ordinary descendant of Adam.

On a recent road trip, my wife and I drove across vast stretches of West Texas flatlands… just incredibly, unbelievably flat. Coming over a small rise, we could see for miles to another ridge in the distance. The Genesis 3:15 passage is like a prophetic overlook, elevating the reader so he or she can gaze across the entire expanse of Old Testament history and directly into the stable in Bethlehem:

The message of revolution in the Garden is this: from the first moment you realize that your life is ruined and broken, God has a word of hope for you! The Savior has come to destroy the enemies of your soul. Rescuing the ones who will accept His invitation, Jesus transforms darkened hearts and depopulates Satan’s kingdom.

Editor’s Note: If you would like to obtain a single PDF file containing all 25 blogs in the “Counting Down to the Christmas Revolution” series, click here to download. May God richly bless your efforts to explore the revolutionary truth underlying the Christmas celebrations around the world.

Genesis 1:28 Then God blessed them, and God said to them, “Be fruitful and multiply; fill the earth and subdue it; have dominion over the fish of the sea, over the birds of the air, and over every living thing that moves on the earth.”

Today is Saturday… the day I love to hate when the weather is warm and the sun is shining… and the grass is growing. Yard work is not my thing. It has become something I work at really hard, but it is a supernatural thing… not an act of the flesh.

The struggle reaches back to a childhood. I mowed, did the hedges, edged the lawn, and bagged the cuttings — only to watch it all come back next week (we lived in the South where everything grows with gusto). My attitude did not improve for many years. Well into adulthood, I found myself dreading the day when the yard would have to be tended to… again.

I grew conflicted, then convicted, when I realized that my Father cares about the way I care for my yard. It is a theological statement about what I really believe happened at creation and where I think He is taking the world in the future. The world was a place being threatened by chaos and by the enemy of our souls. He creates man and woman then tells them (in the Hebrew verse) to subdue the earth — to subjugate the earth, placing it under their directive influence. An Aramaic form of the word contains the idea of beating down a path — a place where you can walk at will in an environment under your control.

The world now is a very dark reflection of the Creator’s intent. Marred by sin and Satan’s dominance over the ages, mankind gave up his assignment in the Garden, yielding rule of the earth to the one Jesus called, the “ruler of this world.” Now we have man-eating creatures, blood-thirsty cycles of life, and killer forces of nature. It’s not okay. It is a world running amok.

Jesus restores things. He puts people back into the physical and emotional state that the Creator intended. He un-does the work of the enemy. Ultimately, the earth itself will be restored to a new form, alive again with vibrant colors, arresting smells, and luscious tastes of the Garden. He calls His people to a ministry of restoration. He announces that God reigns and the kingdom of God is pressing into this world once again. But He does more than just talk, He also demonstrates the reign of God over and over and over again.

Gotta run. Time to get into the yard… again.

My passion lies in helping others to know and experience Him. I'm His child living in the Florida Parishes of Southeast Louisiana, who continues to be amazed by God's love for every human being... especially me!