It was on a Saturday afternoon during the month of August 1806 that five young men from Williams College in Williamstown, Massachusetts, met together to pray near a grove of maple trees north of the campus. As a thunderstorm rolled in overhead, lightning and rain forced the students to run and take shelter in a haystack. As the storm raged, the students prayed that God would send them across the seas to share the good news of Jesus Christ with a lost world. God heard their prayer.

The leader of the Haystack Prayer Meeting was Samuel J. Mills, Jr.  Born in 1783, Samuel grew up in a minister’s home in Torringford, Connecticut, the youngest of four living children born to Samuel and Esther Mills. His father, Samuel Mills, Sr., pastored the same church for 64 years.

Prayers for revival—for God to make His presence real to His people—were common throughout New England in the 1790’s. In 1798 revival broke out in Connecticut and Massachusetts, affecting over 150 churches. In the 30 village churches of northern Connecticut, over 1,700 converts were added to the membership rolls in less than 24 months. Samuel Mills witnessed the impact of that revival.

In 1806, Mills entered the all-male Williams College at the age of 23. Like many colleges in the 1790’s, the spiritual and moral conditions at the school were tough for Christians. Believers were often ridiculed and ostracized from the social life of the campus. The French Revolution and Enlightenment ideals ushered in a wave of skepticism towards God and the Bible. Several church-based colleges completely lost their theological moorings. One pastor wrote, “It seemed as if God had almost entirely withdrawn His gracious influence. We were left to mourn an absent God, barren ordinances, an unsuccessful Gospel and cold hearts.”

In 1805, revival broke out at the congregational church in Williamstown pastored by Seth Swift, deeply affecting a number of students, including a junior named Algernon Bailey. Bailey was repeatedly threatened and harassed by his fellow students for his faith, but his patient endurance only served to draw other students to Christ. The revival spread from the church to the campus.

By the summer of 1806, Mills and others were meeting twice a week for prayer and Bible study. Normally a dozen or so students would attend the meetings. But on one particularly hot Saturday in August, Mills was joined by a childhood friend, Harvey Loomis, and three others: James Richards, Francis Robbins, and Byram Green. 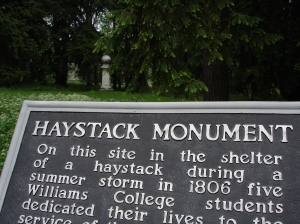 Years later Byram Green recalled that it was during this meeting that Mills first proposed that as students, they could be the first to carry the Gospel to Asia and the Middle East. He writes, “We first went to the grove, expecting to hold our prayer meeting there, but a dark cloud was rising in the west, and it soon began to thunder and lightning, and we left the grove and went under the haystack to protect us from the approaching storm… The subject of conversation under the stack, before and during the shower, was the moral darkness of Asia. Mills proposed to send the gospel to that dark and heathen land; and said that we could do it if we would.”

In 1810, the American Board of Commissioners for Foreign Missions (ABCFM) was launched in response to a petition for assistance coming from Mills and his prayer partners, now students at Andover Theological Seminary. The ABCFM was the first Christian ministry in the United States devoted to sending missionaries overseas. 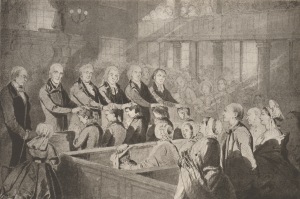 On February 12, 1812, the first missionaries from America set sail for India. On board that ship, the missionary roster included Adoniram Judson and Luther Rice, who would become founders of the modern missionary movement among Baptists.

Samuel Mills went on to become a missionary promoter and statesman throughout the United States. He conducted two missionary surveys of the Mississippi River, including the western territories belonging to the young United States. He helped start a training school for internationals, American Indians, free slaves, and Polynesians. He helped organize the American Bible Society in 1816. He died in 1818 on a return voyage from a mission trip to West Africa. Samuel Mills was 35 years old. He never married.

Why did it happen?  What caused the explosion of American interest in global evangelism and missions after 1810? Was it the students under the haystack? Not quite.

It was a few people in the presence of God.

Today, in His Presence, we too can hear the heartbeat of God for lost souls around us—and our heart will begin to beat with His heart—and we will cry out “Here am I, send me!”

Editor’s Note: Would you like to view a 15-minute documentary of the 1806 Haystack Prayer Meeting and the birth of American foreign missions? Produced for Arkansas Baptist Collegiate Ministries, this video (click here) was created by a wonderful team of talented friends, and written and narrated by yours truly. Enjoy! – DP